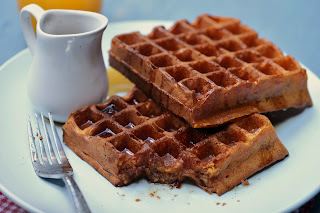 I've tried my hand at gluten-free pancakes several times, and they turned out more like coconut-almond croquettes.  But I've finally figure out my folly!  I was overdoing it on the home-ground almond meal and making the batter too thick.  I slightly modified a recipe found on one of my new favorite blogs ( Eat The Cookie ) and made  some amazing paleo-pumpkin waffles.  Cooking them in the waffle iron instead of trying to flip brittle pancakes one-at-a-time in my cast iron skillet was unspeakably easier-  I'll be doing this more often now.

4-6 tbsp almond meal
A generous dollop of cinnamon
A dash of cloves
A touch of nutmeg  (and ginger if you want, or pumpkin pie spice)
1/2 tsp baking soda
1/4 tsp salt

Stir all of the dry ingredients together in a bowl, dump in the wet ones, and stir it all over again.  Add a little more coconut or almond meal if you went overboard with the pumpkin to get to to the right consistency.  Spray down your waffle iron and cook for about 4 minutes or until the waffles are a nice light brown.  Take care removing them- I had no sticking problems, but they are softer than your average waffle and easier to mangle.

This recipe made three Belgian waffles for me, that could easily vary depending on the size of your iron.
Posted by Daniel at 1:24 PM